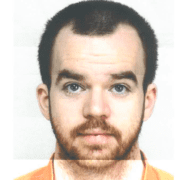 On the night of June 24, 2017, Samuel Tucker was driving his black four door sedan vehicle with a .15 Blood Alcohol Level- Tucker crashed into a utility pole and fence and flipped his vehicle over several times. His passenger was killed. Tucker was hospitalized and upon release, fled to Ireland. Assistant State attorney Victoria Avalon worked diligently to get Tucker back to the United States. Tucker fought his extradition in the Irish Courts. With the help of the Department of Justice, the U.S. Marshall and the Highlands County Sheriff’s Office Tucker was returned to Highlands Courts to face his charges. Last week Tucker entered a best interest plea to DUI Manslaughter. DUI Manslaughter is a 2nd Degree Felony, permissible by up to 15 years in prison. The Judge sentenced Tucker to 11 years Florida State Prison and 4 years of probation. State Attorney Brian Haas thanks Assistant State Attorney Victoria Avalon and Richard Castillo and the Highlands County Sheriff’s Office for their hard work on this case.