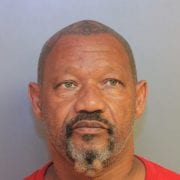 Leo Jackson parked his scooter in the shadows and walked toward his ex-girlfriend’s house with a loaded firearm. Assistant State Attorney Natalie Oven holds up the firearm Leo Jackson used to shoot into his ex’s house. She also presented a shell casing and projectile to the jury as evidence.

About 11 p.m. on Dec. 24, 2015, Jackson walked around his ex’s house, yelled obscenities and shook the window air conditioning units. He then lifted his firearm and shot twice – first into the dining room window, scattering shards of glass across the room and onto the victim’s Christmas tree, and second into the siding of the house.

Jackson, 56, of Bartow, was found guilty of shooting into a building and trespassing by a jury on Thursday afternoon. Immediately following his conviction, Jackson was sentenced to 10 years in Florida State Prison by Judge Kelly Butz. Leo Jackson, 56, of Bartow, was found guilty of shooting into a building and trespassing by a jury Thursday afternoon.

Jackson’s taped statements were played in court during the two-day trial, and in an interview with law enforcement, Jackson said there was no way he could have shot into the house because he’d been at home all evening. Police reminded him that when they arrived on scene, his scooter’s engine was warm.

Further attempts to exonerate himself included Jackson telling law enforcement he didn’t know the victim – even though he’d dated her for 10 years – claiming he had no reason to have been at her house.

But Assistant State Attorney Natalie Oven told jurors there was a reason Jackson fired shots at his ex’s home: He was upset that she’d had broken up with him and was dating another man.

The defense argued that the incident had nothing to do with a lovers’ quarrel and that his client was framed, but Oven rebutted the defense’s claims through witness testimony.

Not only did the victim recognize Jackson’s voice when he was yelling at her, a woman sitting across the street saw him park his scooter and lurk around the house before shooting into it. ASA Oven holds up a photo of the gold scooter Jackson parked outside his ex’s house. A witness saw him drive up on it before he shot into the house.

The woman, who has known Jackson and the victim for three years and was aware of their breakup, said she found it odd that he was flitting in and out of the shadows around the house.

She said she had no doubt it was Jackson because she saw his face.

“It’s the defendant who did it,” Oven said in her closing statement Thursday. “He’s the one with the motive. He’s the one who’s angry.”

The Florida Department of Law Enforcement confirmed through ballistics that a shell casing found outside the house and a projectile recovered from the siding matched Jackson’s firearm.

“Not only did a shooting occur, but we know that it was no one other than the defendant,” Oven said. “No reasonable, logical conclusion could lead anyone to believe it was someone other than him (Jackson). The evidence points only to him.”