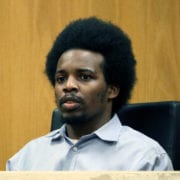 Kiera Williams woke up to the smell of smoke.

About 3 a.m. on April 7, 2015, she heard the dog barking and immediately jumped out of bed and ran into the living room of her parents’ home, where smoke filled the air. The car and garage were completely engulfed in flames.

Williams, her parents and their family dog were unharmed. James Carter, 26, testifies in court March 29. He was convicted of first-degree arson, among other charges, and faces life in prison.

James Carter, 26, was found guilty Thursday of first-degree arson, burglary of a dwelling with $1,000 in damages or more and aggravated stalking. He’s facing life in prison and will be sentenced June 1.

Assistant State Attorney Kristopher Heaton – alongside ASA Randi Daugustinis – told the jury that the incident on April 7 wasn’t the first time something on the Williams’ property had been set on fire.

Williams found a burnt area in the front yard on April 4, 2015 and later received a phone call on a blocked number from Carter – her ex-boyfriend, whom she had an active injunction for protection against – asking how she “put out the fire.” Carter also told her, “If I can’t have you, nobody will – not even your parents.”

In Carter’s initial statements to law enforcement – which were played aloud in court – he consistently denies any involvement in the first fire but wavers on the details of the second fire, eventually saying he set it to “prove a point” to Williams and her family. He later tearfully admits that he jumped the back fence and ignited a water bottle full of gasoline, causing over $250,000 dollars of damage to the house.

Carter said he was trying to create smoke, but the bottle went up in flames. Testimony from a fire marshal and a fire K9 confirm the fire was started in the garage with a liquid accelerant.

In addition to his confession, Carter told law enforcement he went to a lake to cry after starting the fire because he knew he would be in trouble. But when Carter took the stand March 29, he maintained that he did not start either fire.

The defense argued techniques used by detectives in Carter’s first interview coerced him into fabricating details and issuing an untrue statement. Heaton reminded jurors in closing statements Thursday that if Carter truly had been coerced into a false statement, he would have admitted to setting both fires. “He still holds he didn’t set the lawn fire,” Heaton told the jury. “If he’s going along with this, ‘They coerced me, and I’m going to give them everything they want’ mindset, why didn’t he say yes to that?”

Heaton also reminded jurors Carter said he went to the lake to cry and later returned home, where he said he was waiting for law enforcement to arrest him.

“Again, these are more details. This isn’t somebody who’s sitting there going, ‘This is exactly what they want me to say,’” Heaton said. “This is someone reciting what they actually did.”

In Carter’s taped confession, he breaks down into sobs.