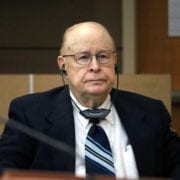 SEBRING – Max Horton said he’s not the type to get mad – he gets even.

On Sept. 17, 2015, lawn workers at Casa Del Lago in Avon Park blew stray glass clippings on a vehicle in Horton’s driveway. Horton, who believed the act was deliberate, motioned for Robert Hendrix – the owner of the lawn service – to approach him in his driveway.

Horton pulled out a gun and pointed it at Hendrix, who dropped to his hands and knees and begged for his life. While threatening to shoot Hendrix, another lawn worker ran toward Horton, causing him to fire a shot at Hendrix. Max Horton, 92, testifies in court April 14, where he was found guilty of attempted manslaughter with a firearm. He faces up to 15 years in prison and will be sentenced June 6.

A jury found 92-year-old Horton guilty April 13 of attempted manslaughter with a firearm. He will be sentenced June 6, where he faces up to 15 years in prison.

Assistant State Attorney Norda Swaby took jurors back to September. Horton had hired a caretaker for his wife, who has severe Parkinson’s and needs help around their house.

Horton complained to the landscape chairwoman at his community about the grass clippings being blown on his caretaker’s car. He was told the clippings would be removed, and they were.

“Horton wasn’t satisfied with that,” Swaby told the jury. “He was angered by the situation.”

He told the chairwoman that something had to be done.

Hendrix was across the street from Horton’s house finishing a lawn when he was motioned over. The two began to talk, and Horton told Hendrix the caretaker talked about quitting because of the grass on her car.

“I’m going to take care of this problem myself,” Horton said, placing an arm around Hendrix’s shoulder.

Horton’s hands started to shake as he reached into a pouch on his hip, pulled out a semi-automatic handgun and pointed it at Hendrix.

Hendricks immediately dropped to his knees and began begging for his life, asking Horton not to shoot him because he had children to go home to. When Hendricks looked up at Horton, the gun’s laser sight was shining in his eyes.

Hendrix slowly crawled backward on his hands and knees while yelling for help, hoping the lawn worker across the street would hear him. Each time Hendrix looked up at Horton, the gun was feet away from his head with the laser in his eyes, solidifying Hendrix’s fear that Horton would shoot and kill him.

“It’s done. This is over,” Hendrix said from the witness stand April 12, recalling his thoughts during the incident.

At that point, the other lawn worker saw Horton standing over Hendrix with a gun pointed at his head. The worker ran across the street toward Horton, who fired the shot while turning to look, missing Hendrix.

When Hendrix realized he hadn’t been hit, he jumped up and began fighting Horton for the weapon. The lawn worker saw their scuffle and ran over, tackling Horton and bringing all three men to the ground.

The worker kept Horton restrained while Hendrix ran to call 911. Police and EMS arrived, taking Horton to the hospital to treat injuries he’d received when he was tackled.

As he was being taken away, Horton looked at the community’s lawn chairwoman and said, “…you have to cover for me on this one.”

But when Horton took the stand to testify, he told jurors a completely different story.

He claimed Hendrix approached him in his driveway and head-butted him, causing him to bleed everywhere, which was why he pulled out a gun and pointed it at Hendrix. Horton also said he was beat up by Hendrix and his lawn worker for an entire hour before law enforcement arrived.

Assistant State Attorney Steve Houchin asked Horton why there was no blood in the driveway from the head-butt and why Horton’s glasses were found in the grass – not where Horton claimed the attack happened.

Horton stuttered before backtracking, saying he wasn’t “bleeding like a gusher” and that “anyone could have moved them (the glasses).”

Houchin asked Horton if he remembered the prior testimony that was completely contrary to the statement he was giving to the jury, and Horton claimed he didn’t hear any of it.

In closing statements April 13, Houchin told the jury that in order to believe Horton, they would also have to believe that Hendrix was willing to “kiss his business goodbye” by assaulting a customer at his home, which made no sense at all.

The defense claimed Horton had a right to protect himself based on stand your ground, but Houchin reminded jurors there was no blood or signs of an altercation at the garage door.

“The stand your ground law is a shield to protect the innocent, not an escape hatch for the guilty, and that’s what you’ve got here,” Houchin said. “This is an after-the-fact fabrication … His statement is inconsistent with the evidence.”

Before wrapping up his closing statement, Houchin repeated one of Horton’s statements to police: “I don’t get mad – I just get even.”

“It’s not against the law to be an ornery old man,” Houchin told jurors, “But when you’re an ornery old man with a temper and a gun, things can get out of hand. … Horton knew he had done wrong, and I ask you to find him guilty.”