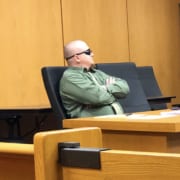 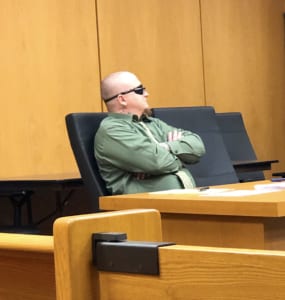 A Lakeland man who fired gunshots at seven Polk County Sheriff’s deputies after a dangerous high-speed chase in North Lakeland in 2018 was convicted Thursday of attempting to kill the deputies.

Joshua Imhoff, 34, was convicted on seven counts of attempted first degree murder of a law enforcement officer, aggravated stalking, and fleeing to elude. Jurors deliberated for about 90 minutes before reaching a verdict.

Circuit Judge Keith Spoto is scheduled to sentence Imhoff on Dec. 5. He faces life in prison.

Imhoff led deputies on a chase on State Road 33, was struck by a deputy’s cruiser when the deputy attempted to stop him, then later tried to run away after stop sticks caused the tires on his truck to deflate. Imhoff got out of his truck and started firing shots at the deputies, who described “bullets whizzing by their heads” in testimony.

Once cornered by a deputy, Imhoff drew a knife on one of the deputies. The deputy struck him with his cruiser, but Imhoff was able to get back on his feet and threatened one of the deputy’s with a knife. The deputy fired his gun, striking Imhoff in the stomach and eye. Seconds later, the same deputy rendered aid to Imhoff before an ambulance arrived.

The incident started in Davenport about 4 a.m. on Jan. 12, 2018 when Imhoff began exchanging Facebook messages with his ex-girlfriend.

He became angry when she told him that she couldn’t see his child at that particular time.

“Whatever man I see you with, I’m going to pop him,” Imhoff wrote. “The only way you’re going to get rid of me is to have me killed.”

The deputy began following him west on I-4 and a chase ensued. Imhoff avoided stop sticks at the U.S. 33 exit and continued north before turning onto Tomkow Road. Imhoff continued, heading south on U.S. 33 before a second attempt at stop sticks worked, causing him to lose control of the vehicle. When he exited the truck, he fired multiple shots at deputies before he was struck by a deputy’s cruiser.