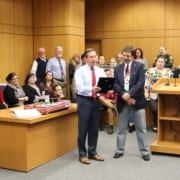 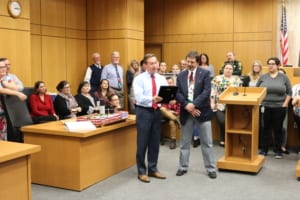 After nearly 30 years, Pete Mislovic has hung up the Ohio State lanyard.

But Mislovic, 67, will leave a legacy of mentoring and encouraging young, up and coming lawyers into successful prosecutors, judges and defense attorneys.

“Pete has been such an important part of our team for many years,” State Attorney Brian Haas said.  “We will miss him a great deal, but hope he enjoys his well-deserved retirement.”

Born in Hamilton, Ohio, Mislovic and family left the small Ohio town in 1969 for a New Jersey town outside of New York City after his father received a promotion and transfer from the paper company where he worked.

It was a culture shock for the 16-year-old Mislovic who was used to having short haircuts and wearing button down shirts.

“It took about a year to get used to it,” Mislovic said.

But soon Mislovic adjusted, returned to Ohio to attend The Ohio State University in the early 1970s then enrolled in Stetson University Law School. He graduated from law school in 1978 and was drawn to Lakeland because his brother, Joe, and sister-in-law, Kathy, lived there.

After working in Tallahassee for a short stint, Mislovic began a job in criminal defense and family law with a  firm run by Greg Ruster and the late Ted Weeks. After several years there, Mislovic started his own firm, but an overload of paperwork prevented him from practicing law as much as he would have liked.

Former State Attorney Jerry Hill hired him and Mislovic worked his way through the misdemeanor division to felony then to overseeing the Lakeland division. In June of 1997, Hill named him chief of misdemeanor intake.

He loves the job, describing work with incoming lawyers as invigorating.

He’s been around some good ones.

State Attorney Haas worked as an intern in misdemeanor intake. A number of circuit and county judges worked for him or along his side in misdemeanor.

He has a bit of advice for the new lawyers: Try not to get too overworked with the massive number of cases, pay close attention to potential technicalities in cases that may arise and don’t let either the highs or lows in the job impact you too much.

What will Mislovic miss the most? All the people he worked with on a daily basis.

“Everybody I run into has been fun to work with,” Mislovic said.

So what are his plans for retirement?

Spending more time with his wife, Piper, children and grandkids and some golf and fishing.

One thing he won’t be doing is attending OSU football games.

Wearing an OSU tie and the lanyard, Mislovic said he’s been bad luck for the Buckeyes since he’s lived in Florida.

,” Mislovic said, describing how it was tough to tolerate Florida Gators fans in 2006 and 2007 after the team defeated Ohio State in the football and basketball championship games that season.

“It was unbearable,” he said.