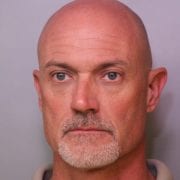 LAKE ALFRED – Shawn Marlow was arrested Friday, Oct. 14, by investigators with the State Attorney’s Office for stealing $44,175 from his customers and failing to provide them with the goods and services they paid for. Shawn Marlow, center, was arrested Oct. 14 in Lake Alfred and charged with scheme to defraud over $20,000, eight counts of grand theft of a person over the age of 65, obtaining property with intent to defraud and grand theft over $300.

Marlow, 46, of Lakeland, was served with a search warrant Friday. SAO investigators – joined by PCSO, LPD, LAPD and the Florida Department of Revenue – obtained evidence from his business, Ron’s Golf Carts, 1870 U.S. Highway 17-92 in Lake Alfred, in order to secure evidence on existing victims and identify new ones. An investigator with the Department of Revenue, center, speaks with Marlow as SAO Investigator Steve Menge interviews him Oct. 17 at Ron’s Golf Carts in Lake Alfred.

The Department of Revenue has been looking into Marlow because his company has failed to remit sales taxes since 2014.

Over the past two years, Marlow has taken money and property from customers at his business, promising that he would either repair their broken golf carts or deliver a new one. As months passed and customers began calling Marlow to check on the status of their cart, they received a myriad of excuses as to why their order had not been completed.

In some cases, Marlow deposited checks the same day they were received. One case shows he deposited a check 15 minutes after he received it. Victims referred to Marlow as a “crook” and the “biggest con artist.” The majority of Marlow’s victims were elderly and were not repaid.

Some of the victims grew tired of waiting and listening to Marlow’s excuses, so they contacted law enforcement. PCSO and LAPD were able to get $25,350 of the stolen funds returned to victims.

If you believe you are one of Marlow’s victims, please contact SAO Investigator Steve Menge at 863-534-4920 or smenge@sao10.com. The investigation is ongoing.