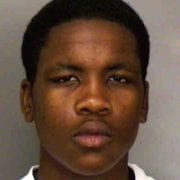 Reginald Leon Streeter was sentenced to life in prison Monday. Reginald Streeter, 21, was given two consecutive life sentences Monday. He had been convicted twice of robbery with a firearm prior to this incident.

Streeter, 21, of Lake Wales, was convicted by a jury in August of burglary of a dwelling with an assault while armed, attempted robbery with a firearm, resisting officers without violence while wearing a mask, giving false info to law enforcement and possession of cannabis and drug paraphernalia.

He kicked down the front door to a Winter Haven home and attempted to enter the victims’ bedroom, threatening to shoot through the door if they didn’t open it. While the victims kept the door barricaded, Streeter’s accomplice broke through their bedroom window with the butt of a shotgun.

Law enforcement was in the area working a burglary when they heard the window break. They arrived at the Winter Haven home in time to see Streeter run out of the residence with a silver firearm in his hand.

Streeter swam across a retention pond and was found hiding underneath a car.

He had been convicted twice of robbery with a firearm and was out of prison less than 60 days when the incident occurred. Because Streeter is a habitual violent offender, Assistant State Attorney Michael Nutter asked Judge Kelly Butz for the maximum sentence, and she granted his request.

Streeter was given two consecutive life sentences for count one and two: burglary of a dwelling with an assault while armed and attempted robbery with a firearm.