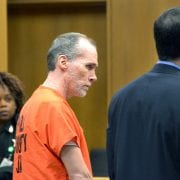 Gary Carroll was sentenced to 20 years in prison Friday for striking and killing a bicyclist and leaving the scene.

Carroll, 48, of Lakeland, struck and killed the 32-year-old victim, left the scene of the crash and removed the physical evidence from his vehicle. He was found guilty by a jury on Aug. 22 and was sentenced by Judge Sharon Franklin on Friday. Gary Carroll stands in court with his lawyer Friday, Sept. 30, as he waits to be sentenced by Judge Sharon Franklin. Carroll was found guilty of his charges in August.

In a letter that Carroll wrote to the judge, he told her he struggled with his health and asked for her leniency. He said his heart goes out to the family and friends of the victim.

But Carroll wasn’t the only one with a letter.

The victim’s 7-year-old daughter wrote one to Franklin as well.

Her letter talked about how her father would take her to the market and buy her stuffed animals. While she said she forgave Carroll because it was the right thing to do, she asked the judge to send him to jail “so no other kids don’t have their dads.”

Other family members talked about the victim’s devotion to his daughter and how he would ride his bicycle from Lake Wales to Bartow after work every night so he could be with his daughter. He wanted to make sure he didn’t miss an opportunity to spend time with her.

Carroll’s attorney asked that Franklin show leniency because of his health, stating that he didn’t think it would be justice for Carroll to die in prison.

But Assistant State Attorney J.C. Hill countered by saying Carroll’s actions – both by leaving the scene with death and tampering with evidence – were an effort to take justice away from the victim’s family.

“This defendant tried to avoid the consequences,” Hill said. “He tried to snatch justice from this family who lost a loved one.”

After the sentencing, the victim’s family members embraced each other as Carroll was removed from the courtroom.