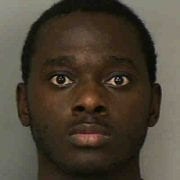 Jurors found 24-year-old Benjamin Smiley guilty Thursday of killing a Lakeland man, making it the second time he’s been convicted of murder in less than a year. After deliberating for about six hours, the jury found Smiley guilty of first-degree murder, robbery with a firearm, tampering with evidence, aggravated assault and burglary of a dwelling.

At gunpoint, Smiley had the victim’s stepson take him into the home and to the bedroom where the safe was. The home invasion turned into a homicide when Smiley shot 58-year-old Clifford Drake two times – once in the hip and again in the chest – after demanding he give him the location of the safe.

Drake fell to the floor, and Smiley then pointed the gun at Drake’s stepson – who witnessed the murder – and demanded he get on the ground. Smiley fled from the residence.

In November of 2015, Smiley was also convicted of first degree murder for a similar home invasion shooting Lakeland that resulted in the death of 46-year-old Carmen Riley.

While prosecutors are seeking the death penalty in both cases, Smiley’s sentencing will be delayed until the Florida Supreme Court makes a final decision regarding the state’s death penalty.

During the 6-day trial, Smiley testified that he wasn’t in Lakeland at the time of the 2013 shooting and that he was unsure whether he owned the backpack and hoodie law enforcement recovered, both of which had his DNA on them.

“It’s bad luck that you’re in the homicide investigation?” Assistant State Attorney Kristie Ducharme asked Smiley as he sat on the witness stand Thursday. “Is it sheer coincidence that your DNA was on several (items)?” He also claimed that every witness who’d placed him at the scene of the crime lied and that he couldn’t remember where he was or what he was doing the night or the murder.

“The person who has the most to lose on the outcome of case is you,” Ducharme told Smiley. “You have the greatest motive to ensure the jury believes what you’re saying.”

When Smiley was asked by Ducharme if those statements were correct, he hesitated then agreed.

In her closing statement, Ducharme reminded jurors that the eyewitness account and DNA weren’t the only pieces of concrete evidence linking Smiley to Drake’s murder. Cell phone records show Smiley making a call just after Drake was shot, placing him at the scene.

Benjamin Smiley is either the most unlucky person on the planet, Ducharme said in her closing statement, or he is the person who murdered Clifford Drake in front of his stepson. She reminded jurors that the mountain of evidence presented in trial proved that Smiley killed Drake.