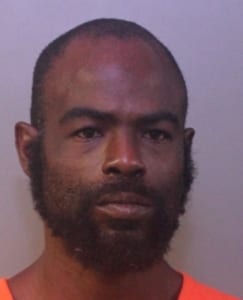 During a May 1 encounter with Lake Wales Police, Maurice Heyward, 40, became violent with officers, even causing one of the officers to fall into and damage one of the department’s Ford Explorers.  Prior to the incident, Heyward sped through a stop sign on his bicycle at Tillman Avenue and Second Street. When Heyward was pulled over, the officer smelled marijuana and asked for identification. The officer asked about the smell and Heyward became nervous, placing his hands in his pockets. Heyward then attempted to run away.  The officer grabbed his t-shirt, Heyward punched the officer in the arm, and a second officer arrived to help. That officer grabbed Heyward by his midsection in an attempt to bring him to the ground, but Heyward continued to fight, causing the second officer to fall into the car. Eventually, Heyward was subdued with a Taser.

“I’m going to kill y’all,” Heyward yelled at the officers as they handcuffed him.

At a jury trial last week, Assistant State Attorney Joe Concepcion argued to the jury that Heyward should be found guilty of battery on a law enforcement officer, making threats and other related charges.  After deliberating for twenty minutes, the jury agreed, finding Heyward guilty as charged.

This was not Heyward’s first run-in with the law.  Heyward previously served 15 years in prison for three armed robberies.  Following his conviction in this case, Circuit Judge William Sites sentenced Heyward to five years in state prison.

Methodical and Meticulous: Homicide prosecutor recognized statewide as he builds...