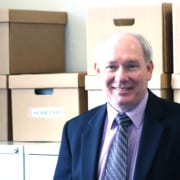 Listening to Homicide Director Paul Wallace, it’s easy to forget he’s put away some of the most cruel and brutal killers during the last 30 years.

He’s direct, kind-hearted, soft-spoken and has a knack for mentoring sharp attorneys in the most high-profile division at the State Attorney’s Office.

Wallace, 62, is also one of the most meticulous, well-prepared prosecutors in the state by presenting complex murder cases to jurors in a detailed-methodical way.

His record is nearly unrivaled.

Of the 78 first degree murder trials he’s had since 1983, 73 people have been found guilty. Ten of those have been sentenced to death. 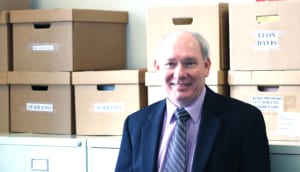 Prosecutor Paul Wallace stands in front of some boxes from previous murder cases.

The Haines City native was recognized for his work earlier this year. Florida’s 20 state attorneys voted to name Wallace prosecutor of the year. He received the award, named after the late Gene Berry, at a ceremony in July. His former colleague in the homicide division, the late John Aguero, received the award in 1990.

Wallace sits back in his chair in his office as he describes some of the most gruesome murders this county has seen.

He’s surrounded by boxes of old cases that have haunted Polk County residents. The boxes are filled with reports on death penalty cases, such as  Nelson Serrano, who was sentenced to death in 2007 for four execution-style slayings at a Bartow manufacturing plant, and Leon Davis, the Lake Wales man convicted of fatally shooting two clerks at a convenience store near Lake Alfred then a week later dousing two Lake Wales insurance agency clerks with gasoline and setting them on fire during a robbery.

His most recent murder case involving Cheyanne Jessie was one of the most heart wrenching. Jurors recommended the death penalty for Jessie earlier this summer for the fatal stabbing and shooting of her 6-year-old daughter and 50-year-old father.

“We had never had a case where someone just took a gun and put it to their child’s head,” Wallace said.

While Wallace has devoted his career to the State Attorney’s Office, outside of the office he’s just as focused on his church.

“Much like his calling to be a prosecutor, Paul had a calling to help those less fortunate than him through mission trips,” State Attorney Brian Haas said during the presentation ceremony. “He has been to Central and South America and East Africa. From building churches, schools, teaching educational programs and spreading the word of God, Paul does it all.”

Mentor to the SAO

Wallace’s experience not only helps in the courtroom, but he’s also able to share knowledge he’s gleaned from previous cases with younger colleagues.

Assistant State Attorney Kristie Ducharme, who worked on the Jessie case with Wallace, said he has taught her the ability to be patient and unrattled during a trial.

Her passion for a conviction can often be on display for jurors, which can lead her into trouble if a judge says something with which she disagrees.

Wallace has taught her to be more subdued.

“He’s taught me patience inside and out,” Ducharme said. “He’s cool and has confidence and faith that the right thing will happen.”

She described Wallace as a “confidence builder who makes you feel really good about what you’re doing.”

The Jessie case Ducharme’s first since coming back from maternity leave. Nervous, Wallace motivated her during the weeks-long trial.

d that Wallace’s dedication and commitment to his craft are traits he has admired since he started.

“He knows cases inside and out,” Levine said. “We all continue to learn from him.”

Wallace graduated from Haines City High School in 1974. He attended Polk Community College then Stetson where he earned a business administration degree. He then entered Stetson Law School.

“I was worried I may not make it,” Wallace said.

During school, he enjoyed criminal law, deciding to become a prosecutor over a defense attorney because he “couldn’t make a living arguing for somebody who is guilty.”

In December 2014, Wallace retired. He planned to spend more time with his grandchildren, take more mission trips with his wife, Karen, and hike in the Swiss Alps with her.

“He was so dedicated to his cases, the families of the victims and our partners in law enforcement, that Paul continued working as a volunteer, handling a case load equal to that of our other full-time first-degree murder prosecutors,” State Attorney Haas said during the award presentation.

In August 2018, former homicide director Hope Pattey was appointed to the bench, leaving a big vacancy in the division.

After State Attorney Haas and Wallace met, the longtime prosecutor agreed to return. Within 10 months after he took the position, Wallace had obtained three unanimous death penalty recommendations.

What does he want to do before he retires again?

Continue to mentor younger assistant state attorneys, preparing them for tough cases and retrials in the spotlight against seasoned defense lawyers.

He will toil away on keeping some of most savage, evil killers behind bars. Some of the cases just haven’t gone away even though they are decades old. In the coming months, Wallace is expected to argue that Paul Beasley Johnson should be sentenced to die. It’s the fourth time Johnson, 70, will face the death penalty. He  was already sentenced to die in 1981 for killing three people, including a Polk County Sheriff’s deputy. Most recently, he was resentenced in 2014 on an  11-1 jury recommendation, but since then the U.S. Supreme Court has ruled that the Florida Supreme Court should set aside death sentences of those who didn’t have a unanimous jury recommendation after 2002.

Wallace said retirement will be for good the next time.

Lakeland vet sentenced to jail for cruelty to her horses