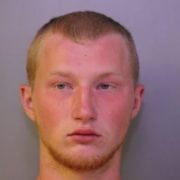 The fourth and final defendant charged with the murder of Robert Banks was found guilty by a jury Friday morning. Johnson lured Banks to his house the next day, where Banks was brutally beaten by Anthony Johnson, his two brothers – Nathan Johnson and Brian Johnson Jr. – and their friend Michael Gunn.

“We were just going to beat him up and send him to the hospital with a couple of broken bones and bruises,” Johnson said from the witness stand Thursday. “I felt like I had to (beat him up) because I gave him my mom’s number. I was responsible.”

But in addition to feeling responsible, Johnson admitted he personally wanted payback because he was angry.

Banks told the four men that he never touched their mother, but they turned a deaf ear to Banks and continued kicking him and stomping on him.

The men would run across the room to kick Banks as hard as they could in the face and in the head, shattering his face in the process.

In open court, Johnson demonstrated the force that he used when stomping and kicking Banks. He even agreed with Levine that his kicks were strong enough to have crushed Banks’ skull.

Johnson testified that there were “hundreds” of blows.

After all four men beat Banks, Gunn then grabbed a pipe and split his head open.

Close to the last minutes of his life, Nathan Johnson grabbed a flashlight and sexually battered Banks with it. He then helped Brian Johnson tighten an electrical cord around his neck and strangle him.

Nathan Johnson memorialized the murder by taking multiple cell phone photos of Banks’ beaten and battered body. He sent those photos to his mother. Assistant State Attorney Mark Levine addresses jurors during closing statements Thursday afternoon. Anthony Johnson was found guilty after only an hour and a half of deliberation.

“Yes,” Johnson said, admitting they murdered him as a way to handle the rape accusations themselves.

Banks’ body was dumped into the woods, doused with gasoline, and set on fire.

Anthony Johnson testified that he stayed at home to dismantle the mattress Banks’ body had been on and throw all the evidence away. He also cut out chunks of carpet with Banks’ blood on it and burned it.

Johnson told jurors he “flat-out lied” to law enforcement when they interviewed him and that he had a lot to lose if he was convicted. He claimed he was telling the truth in court but later contradicted himself by admitting he was always willing to lie and do whatever was necessary to cover up the fact that they’d murdered Robert Banks.

During closing arguments Thursday, Levine told jurors that it was not up to Johnson to kill another person because of an allegation.

“It was not his decision to make, yet he made that decision. For the decisions he made every step of the way, he should be held accountable,” Levine said. “Time after time, he chose what to do and how to do it, and he didn’t stop even when he had the chance.”

The defense argued that the incident was simply a beating that got out of control.

But Levine reminded jurors that anger and rage fueled Johnson and the others to an extent that they all participated in the brutal beating and murder of Robert banks.

“None of them stopped until (death) was accomplished,” Levine said. “A man is dead, and Anthony and his co-defendants are responsible for the fact that Robert Banks did not walk out of that house.”

State Attorney Brian Haas said he is pleased with the outcome of all four trials and is thankful for the hard work and dedication of Assistant State Attorney Mark Levine in securing the convictions and sentences.

Nathan Johnson was convicted of first-degree murder, sexual battery, abuse of a dead human body, and tampering with physical evidence. He is facing life in prison.

Brian Johnson Jr. was convicted of second-degree murder, abuse of a dead human body, tampering with physical evidence, and battery. He is facing life in prison and is scheduled to be sentenced Sept. 6.

Brian Johnson Sr. pled to accessory after the fact to a capital felony and abuse of a dead human body and was sentenced to eight years in prison.

JURY VERDICT: Polk City man found guilty for the murder of his wife
Scroll to top