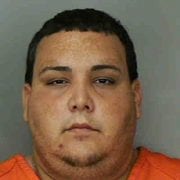 A trail of heroin crumbs led deputies to the closet where Gleen Efrain Zayas-Acosta was hiding. Deputies found 35-year-old Zayas-Acosta behind hanging clothes near a hamper where he’d hidden about a kilo of heroin.

A prosecutor with the State Attorney’s Office laid out all the evidence before the jury in closing statements Thursday, re-enacting the way Zayas-Acosta would have had to run through the Davenport home with the drugs clutched to his chest.

“The 860 grams of heroin did not walk itself from room A to the hamper,” the prosecutor said, pointing to the defendant. “The only person who made that journey is sitting right here: Mr. Zayas-Acosta.”

The jury deliberated for less than 30 minutes and found Zayas-Acosta guilty of trafficking heroin, resisting officers without violence and possession of drug paraphernalia.

“People do not keep the better part of a kilo of heroin sitting in a closet or in crumbles on the ground in the bathroom,” the prosecutor said. “It was obvious he was being cornered. Hiding in the closet was a move of desperation and a move of last resort.”

Deputies obtained a search warrant for the house Zayas-Acosta was staying at after a K-9 alerted to drugs in a package addressed to the Davenport house. They found over a kilo of heroin – which is worth $100,000 on the street – a plate, scale and knife used to weigh and cut the drugs and $32,500 in cash. This chunk of heroin, weighing 860 grams, was found in the hamper and was entered into evidence by the state. The total weight of heroin confiscated by law enforcement is 1,031 grams, which is worth $100,000 when sold on the street.

Law enforcement also found Zayas-Acosta’s social security card, driver’s license and birth certificate in the room where the drugs were located, and he admitted it was the same room he’d been sleeping in.

The defense claimed that Zayas-Acosta’s proximity to the drugs wasn’t significant enough to link him to them, but the prosecutor reminded the jury that the only places in the house where heroin was found were in the rooms where the defendant was.

It may have been in another person’s home, the prosecutor said, but the evidence was in his bedroom.

Chief Assistant State Attorney Brian Haas said he was pleased with the jury’s verdict, especially since heroin is a serious issue facing the community.

“This case involved $100,000 of heroin and $32,000 in drug money,” Haas said. “I’m proud of the work of the Polk County Sheriff’s Office and the State Attorney’s Office in prosecuting this case to a conviction.”

Zayas-Acosta faces up to 30 years on the heroin charge and will be sentenced Oct. 13 by Judge Yancey.