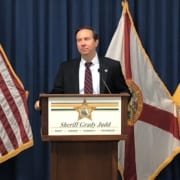 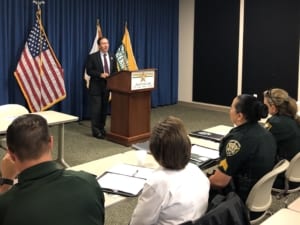 “We have to do everything we can to warn people ahead of time,” Mr. Haas said.

Mr. Haas mentioned a number of scams, including old ones like mail fraud and newer ones, such as text messages residents receive, stating that their bank account has been compromised. Also, Mr. Haas said scams directed at the elderly on Facebook have become all too common.

“Sometimes people are pulled into scams and they’ll end up dumping more and more money into them,” Mr. Haas said.

Toward the end of the discussion, Mr. Haas asked law enforcement if they had any suggestions about ways to tell people about scams in the community.

Officers suggested providing tips on social media and speaking to groups of people in the community about ways to prevent scams from occurring.

“This is our obligation to share this knowledge with our citizens,” Mr. Haas said.

He thanked officers for their hard work.

“I couldn’t do this job without the support of these great agencies,” Mr. Haas said.