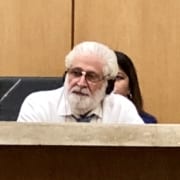 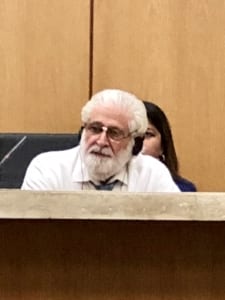 Ismael Bragin explained to jurors that he never thought about questioning why two random people outside of Atlanta offered him money to deliver a heavy orange Nike shoe box to Davenport.

Through an interpreter, Bragin, 71, of Cartersville, Ga., said he thought that men had just given him important documents to deliver to Florida.

They deliberated earlier this month for an hour before convicting him of two first degree felonies, conspiracy to traffic methamphetamine and trafficking methamphetamine. Bragin, who is scheduled to be sentenced in November, faces up to 30 years in prison.

Instead of documents inside the Nike box there were two large plastic bags filled with two kilograms of of methamphetamine, which has a street value of more than $50,000.

“Your telling me these people gave you papers drive all the way down from Atlanta, Georgia to Polk County,” Randall said.

“You are aware that things exist like FedEx and a postal service,” Randall asked. “You can get a box full of papers delivered to you sometimes in a day.”

Bragin said looking back, he should have been more suspicious. But he said he was simply pleased he was receiving $500 for his trip to Miami.

Bragin was arrested in October, 2016, during a sting by Polk County Sheriff’s Office detectives. Detectives, posing as drug buyers, were expected to pay $36,000 for the meth. Once the deal was made, Bragin was arrested in a parking lot at Posner Park. When questioned, he told detectives someone he met while fishing in Georgia asked him to bring the shoe box to Florida since he was already traveling there. The man also gave Bragin a cell phone to carry and told him they will call him and direct him where to go once he arrived in Florida.   Upon delivering the box of drugs to undercover detectives, Bragin immediately began asking for the money.

Man, 19, convicted of beating his mother with a baseball bat