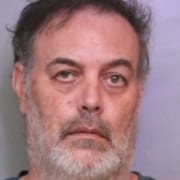 Jerry Salter Jr. started abusing his victim at the age of five.

A jury deliberated for about 90 minutes Thursday and convicted Salter of three counts of capital sexual battery on a victim less than 12 years of age. Salter is facing mandatory life imprisonment, which will be handed down on April 12.

“This became his normal,” she said, “and it continued for over a decade.”

After every act, Randall said, Salter told the boy not to tell his mother. And because the child was fearfully protective of his mother, he complied.

In May of 2017, the victim came forward. He told law enforcement Salter had been abusing him for years and that he wanted the abuse to stop and for the defendant to be out of his life.

The teenager asked Salter when he planned to have sex with him again.

“When we see each other,” Salter said.

Randall told jurors the strongest part of the controlled call was when the victim then asked Salter why he liked having sex with him.

He was then arrested by law enforcement and taken in to custody.

At trial, the defense said the victim only came forward with the allegations because he wanted a cash settlement. They claimed the evidence in the case had not been corroborated.

But Randall reminded jurors that the victim remembered powerful details spanning back more than a decade.

“You do not tell a child that he’s like milk chocolate,” she said, adding that Salter’s incriminating statement on the controlled call was woven in with discussion about school and the victim’s mother’s health like it was normal.

“This was long-term abuse,” Randall said. “It’s because of his (Salter’s) own admissions that the state has proven his to you beyond a reasonable doubt.”