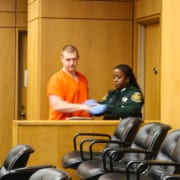 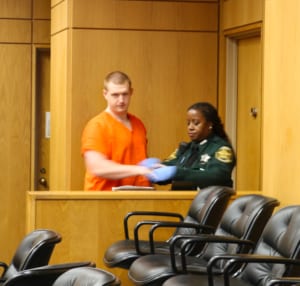 A Lakeland man was sentenced to 40 years in prison on Thursday for fatally stabbing a man then threatening to kill a witness if she told anyone about the stabbing.

Circuit Judge William “Bill” Sites sentenced Ronald Wagoner, 29, to 30 years for manslaughter followed by 10 years for tampering with a witness. The sentences are to be served consecutively.

Gabriel Gamino, 32, was stabbed in the face and the shoulder area near his lungs on Nov. 18, 2016 outside his home in Lakeland on Country Place Road. Jurors found Wagoner guilty on Aug. 29.

Assistant State Attorney Steve Alamia told Sites there was no evidence that Wagoner provoked anyone.

Sites said that he remembered the trial well.

“For the life of me, I can’t figure out why this occurred,” Sites said of the stabbing.

Before he sentenced Wagoner, he said that the case was about Gamino, whose family members sat in the audience.

State Attorney Brian Haas thanks ASA Alamia and the Polk County Sheriff’s Office for their work on the case.