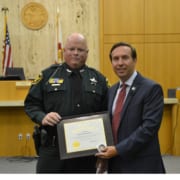 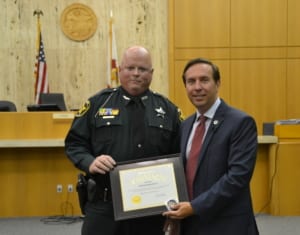 The crash led to the conviction of Charles Lewis, who left a Halloween party after a night of drinking alcohol.

That night, Sheriff’s Deputy Adam Pennell had stopped to help a stranded driver on a dark stretch of State Road 60. Lewis, on his way home, struck Pennell and the driver. The driver was killed, while Pennell suffered critical injuries. Lewis never stopped.

He reconstructed the crash, interviewed people, and through a tip from the public,

eventually charged Lewis with vehicular manslaughter and leaving the scene of an accident with death. During an interview with Lewis, he obtained an admission of guilt from the defendant.

He worked tirelessly as he prepared for the trial, meeting with Perry numerous times.

The preparation paid off.

He was a flawless witness during the trial.

Our county is fortunate to have Detective Brackley serving as a law enforcement officer.