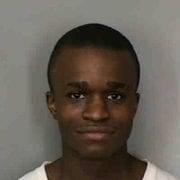 The only way Nikimah Stanley said she felt she could keep her nightmares at bay was to know the man who stabbed her would spend the rest of his life in prison. Coy Dotson, 25, of Poinciana, is fingerprinted after his sentencing hearing Feb. 17. He was convicted of attempted first-degree murder in December.

Stanley was stabbed by her then-boyfriend Coy Dotson over 14 times, and he was found guilty of attempted first-degree murder in December. She suffered from severe wounds in her neck and chest that left her in critical condition, requiring a ventilator.

“I don’t want to have to deal with the same anxiety throughout my adult life knowing one day he will come back,” Stanley wrote in a letter that was read aloud to the court. “Life in prison is the only way.”

At the sentencing hearing Feb. 17, Judge Harb granted her request.

“She (Stanley) is alive only because of the medical treatment and intervention,” Harb told Dotson during the hearing. “Life imprisonment is applicable in this case, and this court finds that you’ve earned that sentence.”

The defense claimed Dotson had mental health issues and that he shouldn’t be sentenced to life because he may have a chance at rehabilitation. But Assistant State Attorney J.C. Hill told the judge Dotson didn’t give Stanley a chance and that it was “nothing short of a miracle” that she lived.

“He stabbed her and sat on top of her chest. She had to play dead … he came back and stabbed her one more time just to make sure she was dead,” Hill said. “If he did this to someone he cared about, what would he do to someone he doesn’t know?”